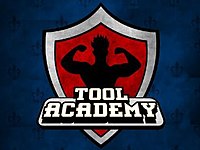 Tool Academy is a competitive reality television show featuring "unsuspecting bad boys" (and women) who have been sent to "relationship boot camp". The contestants, all of whom have been nominated by their respective partners, initially think they are taking part in a competition for a title. However, shortly after arriving they find out the truth: they are actually being entered into a "charm school" which focuses on teaching them how to behave as partners. Each week, one contestant is eliminated and his/her partner must choose whether or not to stay with him/her. The last contestant remaining wins a $100,000 prize. The show is currently hosted by reality television show host, Jordan Murphy, alongside relationship counselor Trina Dolenz who help the contestants with their relationship problems and decides who is expelled.