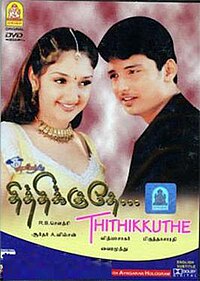 Thithikudhe (English: It's pleasantness) is a 2003 Indian Tamil-language romantic drama film directed by Brinda Sarathy. It stars Jiiva and Sridevi Vijaykumar in the lead love roles. The film's score and music were composed by Vidyasagar. It was released on 1 August 2003. This film is the Tamil remake of the 2001 Telugu film Manasantha Nuvve. It tells the story of two childhood friends and how they reunite some time later.

Chinnu and Anuradha (Anu) are childhood friends who live in a village. They always enjoy singing, dancing, playing and having fun with each other. Anu's father (Devan), who is a rich government official, gets transferred and relocates to another place with his family, which makes Anu lose contact with Chinnu. Before Anu leaves the village, she gifts a nice and beautiful musical watch to Chinnu as a token of her remembrance. Chinnu's mother passes away suddenly, and he is left alone. Chinnu is adopted by Chandramohan's (Nassar) family and gets renamed as Venu.