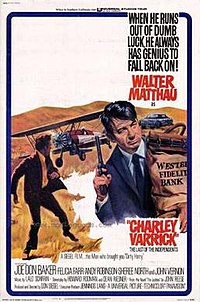 Charley Varrick (aka The Last of the Independents and Kill Charley Varrick) is a 1973 American neo noir crime film directed by Don Siegel and starring Walter Matthau, Andrew Robinson, Joe Don Baker and John Vernon. The film was based on the novel The Looters by John H. Reese.

Charley Varrick is a crop-duster and former stunt pilot. Charley, his wife Nadine, longtime accomplice Al Dutcher, and youngster Harman Sullivan, rob a bank in the rural community of Tres Cruces, New Mexico. While Nadine waits in the getaway car, the heavily disguised Charley and his two accomplices draw their guns and begin the heist. A police officer passing by recognizes the getaway car. When the officers approach Nadine, she shoots at them, killing one instantly and seriously wounding the other, but the second officer returns fire, wounding her. The melee outside distracts the robbers, enabling the bank guard to kill Dutcher. Sensing that the bank manager is concealing something, Charley forces him to reveal two large satchels of cash. Charley, Harman, and Nadine flee, but Nadine dies soon thereafter. Charley and Harman swap vehicles and prepare to blow up the getaway car, with Nadine's body inside. They are stopped by another police officer, but before he can search their van, the explosion goes off and the officer races away.