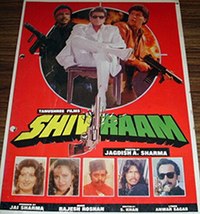 Shiv Ram is a 1991 Hindi-language action film, produced by Jai Sharma under the Tanushree Films banner and directed by Jagdish A. Sharma. It stars Jeetendra, Aditya Pancholi, Javed Jaffrey, Sangeeta Bijlani, Ekta Sohini in the lead roles and music composed by Rajesh Roshan.

Inspector Shiv resigns from police force when a bullet gets stuck in his head, removing which could lead to his death, but he manages to teach the culprits a lesson by fighting from the other side of the law.