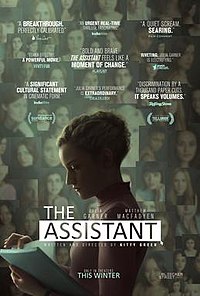 The Assistant is a 2019 American drama film written, directed, produced, and edited by Kitty Green. It stars Julia Garner, Matthew Macfadyen, Makenzie Leigh, Kristine Froseth, Jon Orsini, and Noah Robbins. The film had its world premiere at the Telluride Film Festival on August 30, 2019. It was released on January 31, 2020, by Bleecker Street.

The film takes place over the course of a single day in the life of Jane, a junior assistant who has been working at a film production company in New York City for five weeks. Jane arrives well before dawn and performs various menial administrative tasks. Her job's long hours and demanding tasks keep her busy and incredibly stressed. During a phone call with her mother, Jane learns that she forgot to call her father on his birthday.