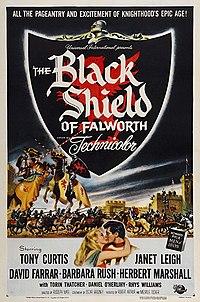 The Black Shield of Falworth 1954

The Black Shield of Falworth is a 1954 Technicolor film from Universal-International, produced by Robert Arthur and Melville Tucker and directed by Rudolph Maté. It stars Tony Curtis, Janet Leigh, David Farrar, Herbert Marshall, and Torin Thatcher. The screenplay was adapted by Oscar Brodney and is based on Howard Pyle's 1891 novel Men of Iron. The original music score was composed by Hans J. Salter.

Myles Falworth (Tony Curtis) and his sister Meg (Barbara Rush) live in obscurity on a farm in Crisbey-Dale with their guardian Diccon Bowman (Rhys Williams). This is to protect them from the attainder placed upon their family by King Henry IV of England (Ian Keith) because their father has been (falsely) accused of treason and murdered by the Earl of Alban (David Farrar). When a hunting party comprising the Earl of Alban, the lord of Crisbey-Dale, and another nobleman, Sir Robert, stop at their farm for refreshment, they are repulsed by Myles, who stops them from molesting his sister.