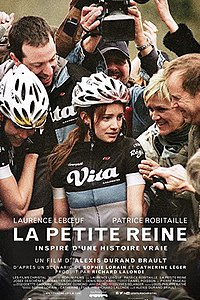 The Little Queen is a Canadian sports drama film, directed by Alexis Durand-Brault and released in 2014. Based on the true story of cyclist Geneviève Jeanson, whose career as a professional cyclist was derailed by a doping scandal, the film stars Laurence Leboeuf as Julie Arseneau, a cyclist who is caught doping just a few races short of the championship race, and Patrice Robitaille as her coach.