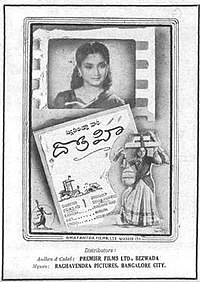 Drohi is a 1948 Telugu-language drama film directed by L. V. Prasad. This was the debut film for Pendyala Nageswara Rao as music director.

Saroja (Varalakshmi), daughter of Zamindar Gangadhar Rao (Rallabandi), is an arrogant woman. She loves Raja Rao (Kona Prabhakar Rao), who assists her father in instituting wrong things. He accidentally kills an old man while driving her car. Dr. Prakash (Prakash Rao) provides shelter to his granddaughter Seetha (Lakshmirajyam). Seetha helps Dr. Prakash in his social service activities. Dr. Prakash marries Saroja. Since then she hates Seetha, harasses her and drives her from the hospital. Prakash continues his social service in the village with the help of Seetha. Knowing this, Gangadhar Rao, with the help of Raja Rao, sets village huts on fire. The angry villagers try to attack them. Seetha, with her kindness, convinces and stops them, but during her attempt, succumbs to bullet wounds. Saroja changes her mind and gets her father and Raja Rao arrested. She distributes her riches to the poor people.