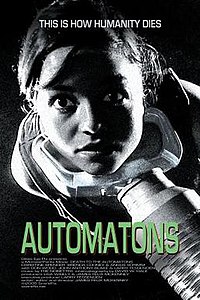 Automatons is a 2006 black-and-white horror film directed by James Felix McKenney, and starring Christine Spencer, Angus Scrimm, and Brenda Cooney. John Levene, Don Wood and Executive Producer Larry Fessenden have supporting roles. The plot is about a war against robots. The movie was made under the working title Death to the Automatons.

Somewhere in the distant future, The Girl is living alone in a bunker. She continues to fight with the generations-long war with the assistance of a group of antiquated robot helpers and soldiers.