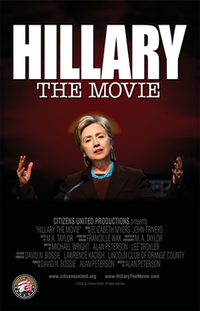 Hillary: The Movie is a 2008 political documentary about United States Senator and presidential candidate Hillary Clinton. It was produced by the conservative non-profit organization Citizens United. The film was scheduled to be offered as video-on-demand on cable TV right before the Democratic primaries in January 2008, but would have been classified as "electioneering communication", which was made illegal under the Bipartisan Campaign Reform Act, by the Federal Election Commission. The producers went to U.S. District Court for the District of Columbia to get a declaration that they could show their movie and promotional ads for it despite BCRA. This case was titled Citizens United v. Federal Election Commission and its final decision at the U.S. Supreme Court resulted in a major change in campaign finance law.