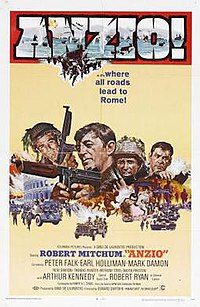 Anzio (Italian: Lo sbarco di Anzio), also known as The Battle for Anzio (UK title), is a 1968 Technicolor war film in Panavision, an Italian and American co-production, about Operation Shingle, the 1944 Allied seaborne assault on the Italian port of Anzio in World War II. It was adapted from the book Anzio by Wynford Vaughan-Thomas, who had been the BBC war correspondent at the battle.

After meeting a general, war correspondent Dick Ennis (Robert Mitchum) is assigned to accompany US Army Rangers for the upcoming attempt to outflank the tough enemy defenses. The amphibious landing is unopposed, but the bumbling American general, Jack Lesley (Arthur Kennedy), is too cautious, preferring to fortify his beachhead before advancing inland. Ennis and a Ranger drive in a jeep through the countryside, discovering there are few Germans between the beachhead and Rome, but his information is ignored. As a result, the German commander, Kesselring (Wolfgang Preiss), has time to gather his forces and launch an effective counterattack.