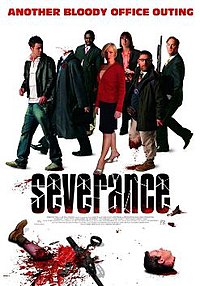 Severance is a 2006 British-German comedy horror film co-written and directed by Christopher Smith. Co-written with James Moran, it stars Danny Dyer and Laura Harris. The film tells a story of group of co-workers who go to a remote mountain forest in Hungary, where they become victims of murderous attacks.

The film opens with George (David Gilliam) and two women (Juli Drajkó and Judit Viktor) running through the woods. The women fall into a large pit trap while George is caught by a snare. As he hangs helplessly, a masked man approaches and disembowels him with a knife.