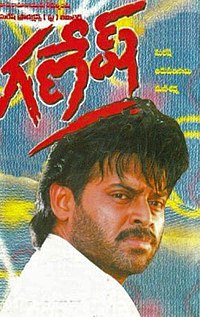 Ganesh is a 1998 Telugu-language action drama film produced by D.Suresh Babu under the Suresh Productions banner, directed by Thirupathisamy. It stars Venkatesh, Rambha and Madhu Bala in the lead roles, with music composed by Mani Sharma. The film fared well at the box office . The film received five Nandi Awards, including the Nandi Award for Best Actor. Venkatesh also won the Filmfare Best Actor Award (Telugu).

Ganesh (Venkatesh) is a journalist whose family and life are affected by corrupt politicians. He is planning how to take revenge and change the system.