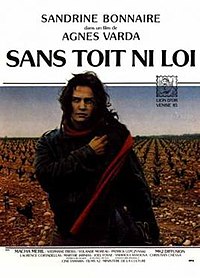 Vagabond (, "with neither shelter nor law") is a 1985 French drama film directed by Agnès Varda, featuring Sandrine Bonnaire. It tells the story of a young woman, a vagabond, who wanders through the Languedoc-Roussillon wine country one winter. The film was the 36th highest-grossing film of the year with a total of 1,080,143 admissions in France.

The film begins with the contorted body of a young woman lying in a ditch, covered in frost. From this image, an unseen interviewer (Varda) puts the camera on the last men to see her and the one who found her. The action then flashes back to the woman, Mona (Sandrine Bonnaire), walking along the roadside, hiding from the police and trying to get a ride. Along her journey she takes up with other vagabonds as well as a Tunisian vineyard worker, a family of goat farmers, an agronomy professor, and a maid who envies what she perceives to be Mona's beautiful and passionate lifestyle. Mona explains to one of her temporary companions that at one time she had an office job in Paris but became unsettled with the way she was living, choosing instead to wander the country, free from any responsibility. Her condition worsens until she finally falls where we first encounter her—in a ditch, frozen.