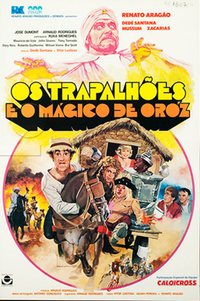 Os Trapalhões e o Mágico de Oróz is the 1984 entry in the Brazilian comedy film series Os Trapalhões. This is a parody of The Wizard of Oz (1939). It was directed by Dedé Santana and Vitor Lustosa. It injects elements and actors of Cinema Novo into family film to direct attention to the ongoing drought in the Northeast, an issue that remains unresolved. It was shot in the city of Orós, in the state of Ceará.