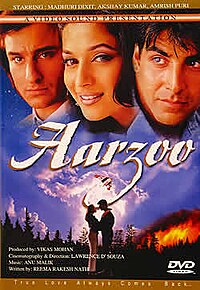 Dayashankar (Amrish Puri) is a wealthy NRI living in London with his wife Parvati( Reema Lagoo) and daughter Pooja (Madhuri Dixit), who is the apple of his eye. Dayashankar also takes care of his deceased best friend's son Amar (Saif Ali Khan), who he regards as a surrogate son, and has always wished that he eventually marry Pooja. Studying in Edinburgh, Amar is overjoyed when he is invited to stay with Dayashankar's family in London. He eagerly prepares for his meeting with Pooja, with whom he has shared his childhood, and plans to ask her father for her hand in marriage as soon as possible.