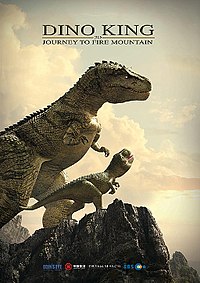 Dino King 3D: Journey to Fire Mountain (a.k.a. Speckles the Tarbosaurus 2: The New Paradise) is a 2017 3D South Korean-Chinese computer-generated action adventure family film. The film was released on October 14, 2017 in South Korea, had early screenings at the American Film Market in Santa Monica in November 2017, and was released in Australia on the 24th August 2019. A sequel to The Dino King, the film is written and directed by Han Sang-Ho, and is produced by Chang Hoon Lee.

In the Late Cretaceous period, a young Tarbosaurus named Junior is chased by a Tsintaosaurus. His father, Speckles, shows up to rescue him. Speckles scolds at Junior as he could have been killed and for not fighting back (and also due to the fact that Junior is all Speckles has left). The next day, when Speckles is hunting some Protoceratops, Junior is in the way and ends up in the water. He can't swim (As Junior has become aquaphobic from being washed out to sea in the first film) , so he calls for help, despite being in shallow water. Speckles is disappointed in his son's cowardice. However, Speckle's over-reacts and scolds Junior for his inability to conquer his fear. Hurt by his father's comments, Junior tells his father that he hates him and the pair storm off from one another.