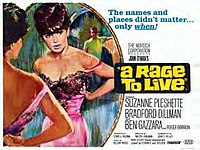 A Rage to Live is a 1965 American drama film directed by Walter Grauman and starring Suzanne Pleshette as a woman whose passions wreak havoc on her life. The screenplay by John T. Kelley is based on the 1949 novel of the same name by John O'Hara.

The sexual voraciousness of newspaper heiress Grace Caldwell threatens to destroy the reputation of her wealthy Pennsylvania family. As a precocious teenager, she is assaulted in her room in her own house by her older brother Brock's friend Charlie Jay, to whom she finally yields willingly, the first of a long series of lovers. Grace understands her weakness but goes on in her path of seduction, until she meets San Francisco real estate broker Sidney Tate at a Christmas party. The two fall in love and he proposes marriage. Grace confesses her past but despite being taken aback, Sidney marries her and she commits herself to a relationship, a pledge she keeps for the first few years of their union, which produces a son and a seemingly idyllic life on a farm.