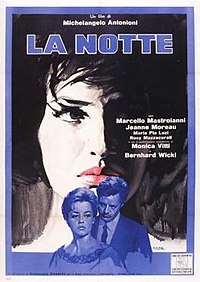 La Notte (; ) is a 1961 Italian drama film directed by Michelangelo Antonioni and starring Marcello Mastroianni, Jeanne Moreau and Monica Vitti (with Umberto Eco appearing in a cameo). Filmed on location in Milan, the film is the relationship between a disillusioned novelist and his frustrated wife as it follows a single day and night where they confront their alienation from each other and the empty Milan circles they travel. The film continues Antonioni's tradition of abandoning traditional storytelling in favor of visual composition, mood and character.

Giovanni Pontano (Marcello Mastroianni), a distinguished writer and his beautiful wife Lidia (Jeanne Moreau), visit their dying friend Tommaso Garani (Bernhard Wicki) in a hospital in Milan. Giovanni's new book, La stagione (The Season), has just been published and Tommaso praises his friend's work. They drink champagne but Tommaso is unable to hide his severe pain. Shaken by the sight of her dying friend, Lidia leaves saying she'll visit tomorrow. Giovanni stays behind and as he leaves his friend's room, a sick and uninhibited young woman attempts to seduce him, and he goes into her room and reciprocates even though it is clear the woman is not in her right mind, until they are interrupted by the nurses.