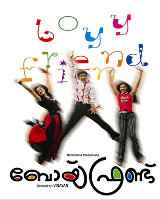 Boy Friennd is a 2005 Malayalam film co-written and directed by Vinayan. The film stars Manikuttan, Mukesh and Sreenivasan in the lead roles. The film was released on 28 October.

This is a movie about Ramesh (Manikuttan), a college student and his widowed mother (Lakshmi Gopalaswami), and how their normal life takes a turn when a minister (Mukesh) who has a grudge against them is found murdered.