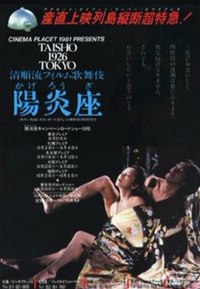 is a 1981 independent Japanese film directed by Seijun Suzuki and based on a novel by Kyōka Izumi. It forms the middle section of Suzuki's Taishō Roman Trilogy, preceded by Zigeunerweisen (1980) and followed by Yumeji (1991), surrealistic psychological dramas and ghost stories linked by style, themes and the Taishō period (1912–1926) setting. All were produced by Genjirō Arato.