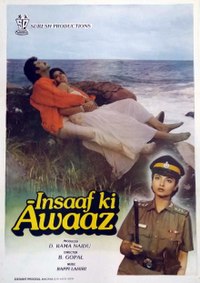 Insaaf Ki Awaaz is a 1986 Bollywood action film directed by B. Gopal and produced by D. Rama Naidu under the banner of Suresh Productions. The film features Rekha, Anil Kapoor and Raj Babbar in pivotal roles. The music director of the film is Bappi Lahiri. The film was a remake of Telugu film Pratidhwani (1986), directed by B. Gopal.