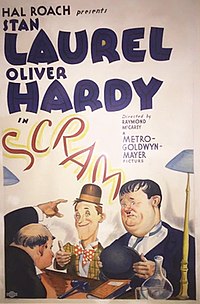 Scram! is a 1932 pre-Code Laurel and Hardy film produced by Hal Roach, directed by Ray McCarey, and distributed by Metro-Goldwyn-Mayer.

The story begins in a courtroom, where Stan and Ollie appear before Judge Beaumont on a charge of vagrancy. The duo quickly anger the judge, who gives them just one hour to leave town. Later, as they are walking down the sidewalk in a heavy rain, they meet a well-dressed, highly intoxicated man who invites them to stay at his mansion. Once they arrive at the residence the congenial drunk cannot find his house key, but the boys finally get into the house, where they startle a young woman, causing her to faint. They revive her with what they think is water, but is gin, and all get tipsy in the process. While the three enjoy music and dancing in the woman's bedroom, the drunk in the hallway learns from the butler that he is in the wrong house, so he staggers away to find his real home. Soon the mansion's true owner arrives; it is Judge Beaumont. Finding Stan and Ollie upstairs with his drunk wife and wearing his pajamas, the enraged judge ominously advances toward Stan and Ollie, who hurriedly retreat to a corner of the bedroom. Stan, in a panic, cuts out the lights, and the film ends in darkness with only the sounds of breaking glass, screams, whirlwinds, and explosions.