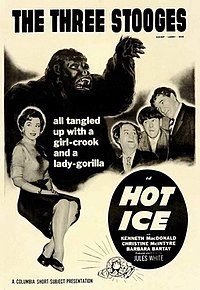 Hot Ice is a 1955 short subject directed by Jules White starring American slapstick comedy team The Three Stooges (Moe Howard, Larry Fine and Shemp Howard). It is the 165th entry in the series released by Columbia Pictures starring the comedians, who released 190 shorts for the studio between 1934 and 1959.

The Stooges are wannabe detectives who inadvertently get their chance to crack a case in Scotland. They manage to stumble on a lead concerning the priceless Punjab diamond being stolen by a crook named Dapper (Kenneth MacDonald). With dreams of becoming genuine detectives, the trio head for Squid McGuffy's cafe asking for the whereabouts of Dapper. They manage to convince everyone at the restaurant that they are actually police.