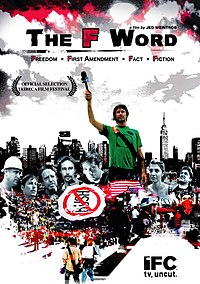 The F Word is a hybrid fiction/documentary feature film from 2005, directed by Jed Weintrob and produced by Christian D. Bruun and Nick Goldfarb. The film was selected to world premiere at the 2005 Tribeca Film Festival in New York City.

Joe Pace is a radio personality whose program, The F Word, is being shut down by the U.S. Federal Communications Commission (FCC) after racking up over $1 million in unpaid indecency fines. On his last day on the air, which coincides with the last day of the 2004 Republican National Convention, Joe sets off to broadcast his own one-man march through Manhattan.