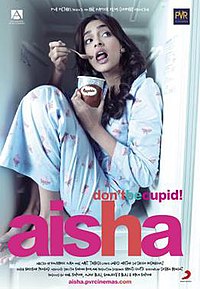 Aisha is a 2010 Indian ensemble romantic comedy-drama directed by Rajshree Ojha, starring Sonam Kapoor, Abhay Deol, Ira Dubey, Cyrus Sahukar, Amrita Puri, Anand Tiwari, Arunoday Singh and Lisa Haydon. It is set in the upper-class society of Delhi, India and is an adaptation of Jane Austen's 1815 novel Emma with the same tone as the 1995 cult Hollywood film Clueless which is also an adaptation of Austen's novel. The choreography of this film was done by Neerav Bavlecha.

Aisha Kapoor (Sonam Kapoor) is a young, rich, upper-class girl who believes that she is perfectly suited for match-making – amongst her friends in particular. Her superficial lifestyle and match-making schemes are constantly criticized by her friend/neighbor Arjun Burman (Abhay Deol), who advises her to stop meddling with the lives of other people. Soon, she has a new project - trying to make a match between her middle-class, small-town friend Shefali Thakur (Amrita Puri) and a sweetmeat business tycoon and friend, Randhir Gambhir (Cyrus Sahukar), much to the chagrin of her best friend Pinky Bose (Ira Dubey). Aisha creates various circumstances to make Shefali and Randhir fall in love. During one such occasion, she meets her aunt's step-son Dhruv Singh (Arunoday Singh), whom she becomes attracted to. In the meantime, Arjun introduces Aisha to one of his colleagues, Aarti Menon (Lisa Haydon), who is from New York. Aisha feels threatened by Aarti's presence and is very antagonistic towards her.