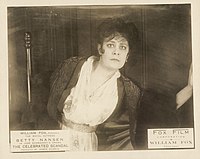 The Celebrated Scandal is a lost 1915 silent film feature directed by James Durkin and starring Betty Nansen. Although the film's copyright registration states that J. Gordon Edwards "picturized" the film, the opinion of film historians, including the American Film Institute, is that while Edwards may have worked on an discarded earlier version, he did not contribute to the picture as released. The Celebrated Scandal was produced and distributed by the Fox Film Corporation.