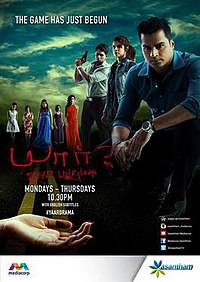 Yaar? is a 2017-2017 Singaporen-Tamil Language mystery thriller Drama starring Vighnesh Nagarajan, Mark Saravana, Kathiravan, Shafinah Banu, Dhivyah, Meshanthe, Sharon, Jenani and Nagarubini. It replaced Alaipayuthey and it broadcast on MediaCorp Vasantham on Monday through Thursday from 3 April 2017 to 29 June 2017 at 10:30PM (SST) for 47 Episodes. It was created by R. Venga and is executively produced by Shamini Maderan.

The top three winners of a beauty pageant mysteriously go missing. This brings Shamen, a decommissioned enforcement officer back into action because he has a personal attachment to the case. So who is behind the mysterious disappearances?