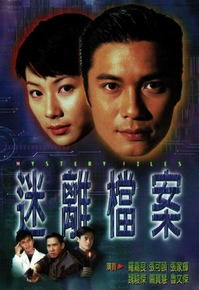 Mystery Files is a 1997 Hong Kong science fiction thriller television series produced by TVB and stars Gallen Lo as a biochemist who advocates scientific methods to refute superstitious theories, utilizing scientific theories to uncover the answers to a series of strange events.

Peter Ko (Gallen Lo) is a university biochemistry professor who is calm and believes in science while opposes superstition. Carrie Man (Maggie Cheung) is a researcher and screenwriter for documentary programmes at a television station who has witnessed a series of strange events. By chance, the two have the opportunity to cooperate to discover the truth of a series of strange cases. Due to their different views, conflict and misunderstands arises from time to time during their cooperation. Eventually, they develop mutual understanding for one another and a relationship also blossoms. One time, during an attempt to save Peter, Carrie was stabbed to death. In order to resurrect Carrie back to life, Peter must venture into the fourth dimension.