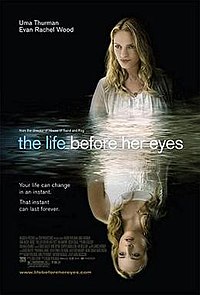 The Life Before Her Eyes is a 2007 American thriller film directed by Vadim Perelman. The screenplay was adapted by Emil Stern from the Laura Kasischke novel of the same name. The film stars Uma Thurman and Evan Rachel Wood. It was released on April 18, 2008, and revolves around a survivor's guilt from a Columbine-like event that occurred 15 years previously, which causes her present-day idyllic life to fall apart.

Imaginative, impetuous, and wild Diana McFee (Evan Rachel Wood) cannot wait for her adult life to begin. While awaiting the final days of high school in the lush springtime, Diana tests her limits with sex and drugs as her more conservative friend Maureen (Eva Amurri) watches with concern. Then the two teens are involved in a Columbine-like shooting incident at their school and are forced to make an impossible choice.