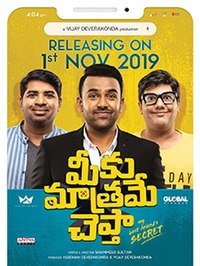 Meeku Maathrame Cheptha is a 2019 Indian Telugu-language romantic comedy film written and directed by Shammeer Sultan, produced by Vardhan Deverakonda and Vijay Deverakonda under the banner King of the Hill Entertainment. The film stars Tharun Bhascker and Vani Bhojan in Lead roles. revolves around a man who lies to his would be wife and then his friends help him cover up the lies, which leads to humourous situations. The music is composed by Sivakumar while cinematography is handled by Mathan Gunadeva. The film marks the debut of Shammeer Sultan as director and Vijay Deverakonda as producer.