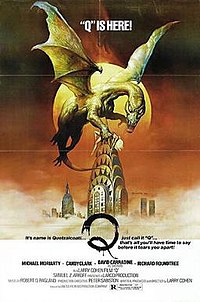 The Aztec god Quetzalcoatl, a winged, dragon-like, female lizard, takes up residence in the art-deco spire of the Chrysler Building, with frequent jaunts in the midday sun to devour various helpless New Yorkers on the rooftops. The resulting bloody mess confounds detectives, Shepard and Powell, who are already occupied with a case involving a series of bizarre ritual murders linked to a secret neo-Aztec cult.