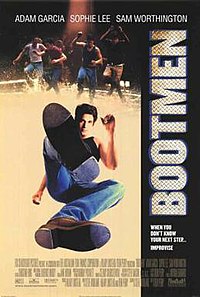 Bootmen is a 2000 Australian comedy-drama film directed by Dein Perry. It was distributed by Fox Searchlight Pictures in Canada and United States and 20th Century Fox Distribution in Australia and funded by the Australian Film Finance Corporation. Production was from 19 June to 18 August 1999 in Sydney and Newcastle by cinematographer Steve Mason who won two cinematography awards in the 2000 AFI awards and the 2001 FCCA Awards. It stars Adam Garcia, Sophie Lee, Sam Worthington.

Sean and Mitchell are young adult brothers, having grown up in the rugged Australian steel city town of Newcastle. The father is a tough coal miner and they have no mother. Mitchell is a small-time criminal, while Sean dreams of being a professional dancer. Their father does not approve of Sean's dancing, so he hides his passion. Sean meets local hairdresser Linda at a dance class and falls in love with her. Things look promising between them, but Sean leaves to make his mark. Mitchell confesses his love for her and she thinks Sean has left, so they end up getting drunk together and having a one-night stand.