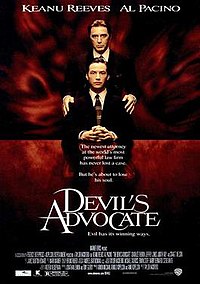 The Devil's Advocate (marketed as Devil's Advocate) is a 1997 American supernatural horror film directed by Taylor Hackford, written by Jonathan Lemkin and Tony Gilroy, and starring Keanu Reeves, Al Pacino, and Charlize Theron. Based on Andrew Neiderman's 1990 novel of the same name, it is about a gifted young Florida lawyer (Reeves) invited to New York City to work for a major firm. As his wife (Theron) becomes haunted by frightening visions, the lawyer slowly begins to realize the owner of the firm (Pacino) is not what he appears to be, and is in fact the Devil.

Kevin Lomax is a Gainesville, Florida defense attorney who has never lost a case. While defending schoolteacher Lloyd Gettys against a charge of child molestation, he realizes his client is guilty. Despite this, Kevin destroys the victim's credibility, securing a "not guilty" verdict.