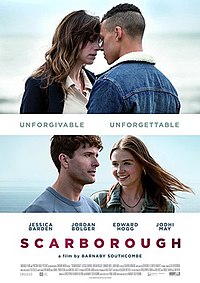 Scarborough is a 2018 British drama film written and directed by Barnaby Southcombe. Set in the town of Scarborough, the story follows two couples who both have a teacher/pupil relationship and are conducting their affairs against a backdrop of the questionable nature of their relationships. It stars Jessica Barden, Jordan Bolger, Edward Hogg, and Jodhi May as the two couples. It premiered at the Warsaw Film Festival on 13 October 2018, and was theatrically released in the United Kingdom on 6 September 2019, by Kaleidoscope Entertainment.

Two couples check into a run-down hotel on the sea-front in Scarborough. Two of the people involved are "barely sixteen" and the other two are their teachers. The dynamics of the teacher/pupil relationship is put to the test over two weekends in Scarborough. Whilst it seems that the couples are aware of each other's presence, they do not interact with each other.