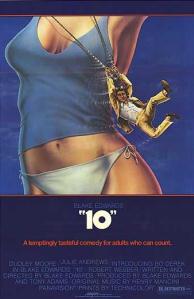 10 is a 1979 American romantic comedy film written, produced, and directed by Blake Edwards and starring Dudley Moore, Julie Andrews, Robert Webber, and Bo Derek. It was considered a trend-setting film at the time and was one of the year's biggest box-office hits. It follows a man in middle age who becomes infatuated with a young woman whom he has never met, leading to a comic chase and an encounter in Mexico.

During a surprise 42nd birthday party for wealthy, well-known composer George Webber (Dudley Moore), thrown by his actress girlfriend Samantha Taylor (Julie Andrews), he finds he is coping badly with incipient middle age. From his car, George glimpses a bride-to-be (Bo Derek) and is instantly obsessed with her beauty, which he rates as "11" on a scale that goes up to 10. Following her to the church, he crashes into a police cruiser, is stung by a bee, and nearly disrupts the wedding ceremony.