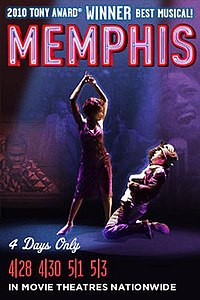 Memphis: Direct from Broadway is a 2011 film of the original Broadway production of the musical Memphis as captured live in performance on Broadway. The show was captured at Broadway’s Shubert Theatre in New York City January 18–21, 2011 utilizing multiple high definition cameras and 96 tracks of sound recording. The film had a limited theatrical release between April 28-May 3, 2011, in more than 530 theaters with high definition digital projection systems in the US and Canada. This marked the first time the Tony Award-winning Best Musical was presented in movie theaters while concurrently running on Broadway.