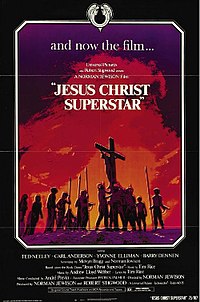 Jesus Christ Superstar is a 1973 American musical drama film directed by Norman Jewison and co-written by Jewison and Melvyn Bragg based on the Andrew Lloyd Webber/Tim Rice 1970 rock opera of the same name. The film, featuring a cast of Ted Neeley, Carl Anderson, Yvonne Elliman, Barry Dennen, Bob Bingham, and Kurt Yaghjian, centers on the conflict between Judas and Jesus during the week before the crucifixion of Jesus.

The film is framed as a group of performers who travel to the desert to re-enact the Passion of Christ. The film begins with them arriving on a bus, assembling their props and getting into costume. One of the group is surrounded by the others, puts on a white robe and emerges as Jesus ("Overture").