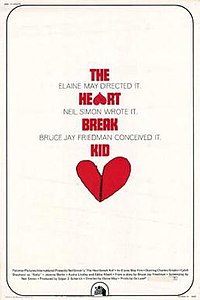 The Heartbreak Kid is a 1972 romantic comedy directed by Elaine May and written by Neil Simon, starring Charles Grodin, Jeannie Berlin, Eddie Albert, Audra Lindley, Doris Roberts and Cybill Shepherd. It is based on the short story "A Change of Plan", written by Bruce Jay Friedman.

In New York City, after a very short courtship, emotionally shallow, self-absorbed Lenny Cantrow (Charles Grodin), a sporting goods salesman, is married to Lila (Jeannie Berlin, daughter of director Elaine May), an unsophisticated and emotionally needy young girl. During their honeymoon in Miami Beach, Lenny meets and pursues the beautiful but shallow Kelly Corcoran (Cybill Shepherd), a Midwestern college girl on holiday with her wealthy parents. When Lila is severely sunburned, Lenny quarantines her to their hotel room as he engages in a series of rendezvous with Kelly, lying to Lila about his whereabouts. Lenny impulsively ends his marriage to pursue an indifferent Kelly, explaining that she is the girl he has been waiting for all of his life and just "timed it wrong."