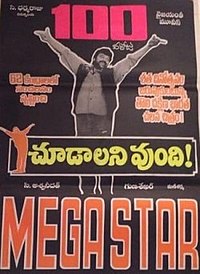 Ramakrishna (Chiranjeevi) is a mechanic whose life changes when he meets Priya (Anjala Zaveri) at a train station. She sees him and feels some inexplicable connection, and then runs away with him to flee her father Mahendra's (Prakash Raj) goons. They end up living in the forest with their son, but Mahendra, who is an underworld don, kidnaps her so that he can marry her off to another don's son. Ramakrishna confronts Mahendra, and in the ensuing struggle, Priya takes the bullet shot at Ramakrishna and dies. Their son loses his voice because of the shock, and Ramakrishna is jailed. Mahendra takes the boy away to Kolkata, where the story originally started. Ramakrishna, with the help of Padmavathi (Soundarya), reunites with his son.