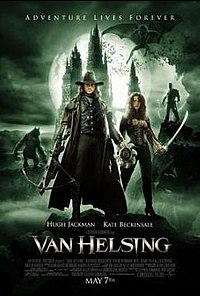 Van Helsing is a 2004 American period action horror film written and directed by Stephen Sommers. It stars Hugh Jackman as vigilante monster hunter Van Helsing, and Kate Beckinsale as Anna Valerious. The film is a homage and tribute to the Universal Horror Monster films from the 1930s and 1940s (also produced by Universal Studios which were in turn based on novels by Bram Stoker and Mary Shelley), of which Sommers is a fan.

In 1887, Transylvania, Dr. Victor Frankenstein, with help from his assistant Igor and Count Dracula, successfully creates a monster. Dracula, a vampire, kills Frankenstein to use the creature for his own purposes. As an angry mob storms Castle Frankenstein, the monster flees to a windmill with his dead creator. The mob burn down the windmill, apparently destroying the monster.