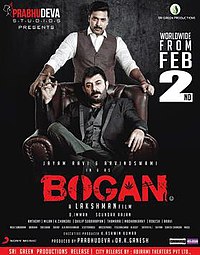 Vikram (Jayam Ravi) is an honest cop who serves as the Assistant Commissioner of Police (ACP) in Chennai. He has a team of police officers namely, Sathya (Varun), Akshara (Akshara Gowda), and Prasad (Nagendra Prasad). He lives with his parents, elder sister (Sindhu Shyam), and brother-in-law (Prakash Rajan). His family sets up an arranged marriage for him with Mahalakshmi (Hansika).