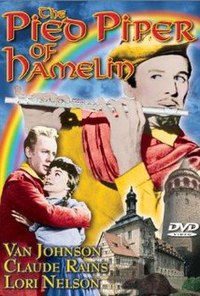 The Pied Piper of Hamelin 1957

The Pied Piper of Hamelin is an American ninety-minute musical film in color, originally made as a television special and first shown by NBC on Tuesday, November 26, 1957, as one of their Thanksgiving Week offerings for that year. It preempted that evening's telecasts of The Nat King Cole Show and The Eddie Fisher Show. Based on the famous poem of the same name by Robert Browning and using the music of Edvard Grieg arranged by Pete King with special lyrics by Hal Stanley and Irving Taylor, it starred Van Johnson, Claude Rains (in his only singing and dancing role), Lori Nelson, Jim Backus, and Kay Starr. It was directed by Broadway veteran Bretaigne Windust. In a direct nod to Browning's poem, nearly all of the dialogue in The Pied Piper of Hamelin was written in rhyme, much of it directly lifted from the poem.

The Pied Piper (Van Johnson) is first spotted working magic in Hamelin by a disabled boy, Paul, and playing his signature tune In the Hall of the Mountain King. Paul tells his best friend, the schoolteacher Truson (=true son), also played by Johnson, but Truson is skeptical.