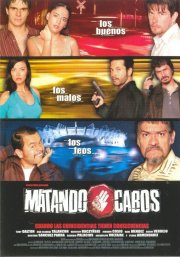 Matando Cabos (Killing Cabos) is a 2004 Mexican crime comedy film directed by Alejandro Lozano in close partnership with long-time friend Tony Dalton. The film was one of the most highly anticipated Mexican movies of all time, mainly due to its high budget and the amount of money put into the action scenes such as the car chase through the Estadio Azteca.

Jaque is in a terrible situation after being caught having sex with the daughter of the dreaded businessman Oscar Cabos; his boss. The day after receiving the most savage beating of his life, Jaque is confronted by Mr. Cabos, who accidentally trips and loses consciousness. Jaque then asks his friend, Mudo, to aid him. Leaving Cabos in his office, a childhood friend that now works as the company's janitor, who was betrayed by Cabos then takes revenge by stealing and wearing Mr. Cabos' valuable clothes. When Jaque and Mudo arrive, Cabos is half naked and they take him to the bathroom while they decide what to do. When Cabos' former friend leaves the building to take his car, he is intercepted by two kidnappers who think he is Cabos, one of whom is actually his own son, who wanted to kidnap Cabos to make him pay for what he did to his father. Meanwhile, in the bathroom, Jaque and Mudo decide, in order to avoid a possible accusation to take Cabos with them and then decide what to do with him, so they flee with him in their car. While leaving the parking lot, they cross roads with the kidnappers, stopping on a street light. Both couples have a body in their respective trunks, and feeling nervous, they smile at each other in order to look casual. Then, they both go opposite directions. While driving, Jaque and Mudo get cut off the road by an impolite bus driver. They confront him in a mid-road stand off and insult each other; Jaque calls the driver "cross-eyed", which makes him remember his tumultuous past, being rejected by everyone, including his fiancé, for being cross-eyed. He gets very angry and rams his bus against Jaque's car and flees. The crash causes the trunk to get stuck, and as a consequence, they cannot get Mr. Cabos out of the car. To aid them, Mudo calls his friend, the legendary pro wrestler Ruben "Mascarita" (who hates being called Mascarita) and his sidekick, Tony "the Cannibal", a man-eating dwarf.