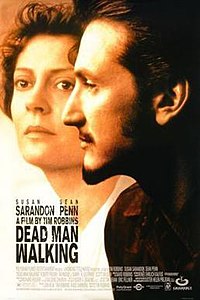 Dead Man Walking is a 1995 American crime drama film starring Susan Sarandon and Sean Penn, and co-produced and directed by Tim Robbins, who adapted the screenplay from the 1993 non-fiction book of the same name.

Matthew Poncelet has been in prison for six years, awaiting execution after being convicted and sentenced to death for killing a teenage couple. Poncelet, held in the Louisiana State Penitentiary, committed the crimes with Carl Vitello, a man who was sentenced to life imprisonment. As the day of his execution comes closer, Poncelet asks Sister Helen Prejean, with whom he has corresponded, to help him with a final appeal.