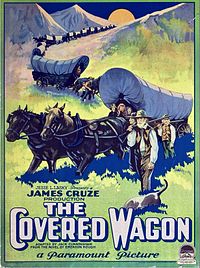 The Covered Wagon is a 1923 American silent Western film released by Paramount Pictures. The film was directed by James Cruze based on a 1922 novel of the same name by Emerson Hough about a group of pioneers traveling through the old West from Kansas to Oregon. J. Warren Kerrigan starred as Will Banion and Lois Wilson as Molly Wingate. On their quest they experience desert heat, mountain snow, hunger, and Indian attack.

The action is set in 1848. Two caravans of expatriate unite in Kansas and travel 2,000 miles west to start a new life in Oregon. The leader of the settlers is the elderly father and natural authority Wingate. Scouts are the headstrong Sam Woodhull and the kind-hearted and talented Will Banion. But Banion has a secret around a crime he is said to have committed in the army. Along the way, they suffer a number of hardships such as hunger and bad weather. In addition, Sam Woodhull, embroiled the settlers in clashes with Indians and later aroused the gold fever in some when news of gold discoveries reached the settlers. A dispute ensues and many leave the caravan and move to California. Time and again Sam Woodhull causes problems, who got involved with Will Banion in a power struggle for the leadership of the caravan and also for the favor of the young Molly Wingate. Fortunately, Banion is by his old friend William Jackson, but in the end he also leaves the caravan shortly before Oregon for California to seek his luck there, as Molly's father forbids a connection with his daughter. Woodhull, who is spurned by Molly because she continues to love Banion, wants to get rid of him in California. He plans to shoot him from ambush. Fortunately, Jackson watches the scene and in turn shoots Woodhull on his back. With his news that Molly is expecting him in Oregon, Will Banion and his wealth are on their way to Oregon and can finally take Molly into his arms.