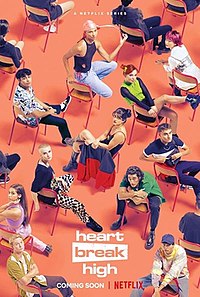 Heartbreak High is an Australian comedy drama streaming television series created for Netflix, by Hannah Carroll Chapman. It is a soft-reboot of the 1994 series first screened on Network Ten. The series follow the students and teachers of Hartley High as they navigate racial tensions in Australia, high school romances, and all sorts of teen angst. The show premiered on 14 September 2022. A month after it was released, the show was renewed for a second season.

After a map detailing the sexual exploits of Hartley High's students is discovered graffitied on the wall of the school, all of the students whose names were on it are forced to attend a new sexual education course called the Sexual Literacy Tutorial (SLT, pronounced "sluts" by the students). The map's creator, Amerie Wadia (Ayesha Madon), becomes a social outcast after taking the fall for its co-author, Harper McLean (Asher Yasbincek), who has stopped talking to her following a tragedy at a music festival they attended.