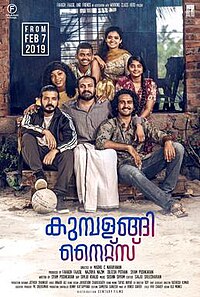 Kumbalangi Nights is a 2019 Indian Malayalam-language drama film directed by Madhu C. Narayanan. The directorial debut was written by Syam Pushkaran and jointly produced by Fahadh Faasil and Nazriya Nazim under their production house Fahadh Faasil and Friends, in association with Dileesh Pothan and Syam Pushkaran under Working Class Hero. The film stars Shane Nigam, Soubin Shahir, Fahadh Faasil and Sreenath Bhasi, along with newcomers Anna Ben, Grace Antony and Mathew Thomas. Shyju Khalid was the film's cinematographer, and its soundtrack and score were composed by Sushin Shyam.

Saji, Bonny, Bobby and Frankie are four brothers living in a small, dilapidated house in the village of Kumbalangi. Saji's father had married Bonny's mother, who then gave birth to Bobby and Franky. When their father dies, the mother abandons the boys to join a religious mission, leaving Saji to be the man of the house. Saji has anger management issues, and often gets into fights with Bobby, an unemployed youngster. Franky is ashamed of Saji and Bobby but gets along well with Bonny, who is mute and kind.