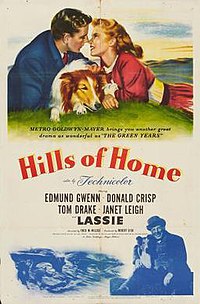 Hills of Home (also known as Danger in the Hills and Master of Lassie ) is a 1948 Technicolor drama film, the fourth in a series of seven MGM Lassie films. It starred Edmund Gwenn, Donald Crisp, and Tom Drake.

Dr. William MacLure (Edmund Gwenn) a Scottish doctor, adopts Lassie, who has an unnatural aversion to water. The Dr. tries to cure Lassie of her fears, but she remains water-shy.