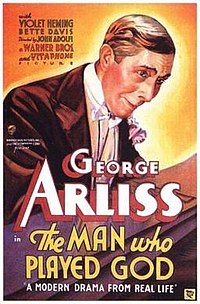 The Man Who Played God is a 1932 American pre-Code drama film directed by John G. Adolfi and produced by Darryl F. Zanuck. George Arliss stars as a concert pianist embittered by the loss of his hearing who eventually finds redemption in helping others; it also features a then little-known Bette Davis as the much younger woman in love with the protagonist.

While giving a private performance for a visiting monarch, concert pianist Montgomery Royle is deafened when a bomb is detonated in an attempt to assassinate the foreign ruler. With his career over as a result of his injury, Royle returns to New York City with his sister Florence, close friend Mildred Miller, and considerably younger fiancée Grace Blair.